Results from the 2022 Developer Survey are now available

What are the implications of licensing a JavaScript library under GPL?

When searching for "gpl javascript" in Google, I currently find these five first results:

EDIT: Can I encourage anyone who has the privilege to downvote on SO to downvote this answer as well? I know I shouldn't be asking this, but I feel that it needs some action from people who know better. It is now the first result that appears when searching for "gpl javascript".

Additionally, this site has a few questions on some of these aspects as well. Examples:

I feel that this site should have its own general question on the implications of licensing a JavaScript library under GPL, to dedramatize further, but also to clarify what is well understood so far and what is not.

I am aware that not all of these sub-questions have necessarily a well-defined answer. Feel free to answer even only partially to the ones you feel comfortable answering.

The following is the answer I got from FSF, with small edits. Answer was provided by a volunteer with "[this] is not legal advice" disclaimer.

If Javascript software licensed under the terms of the GNU GPL is served from the same document alongside an independent Javascript work is may be the case that the two would be considered in mere aggregation (see: http://www.gnu.org/licenses/gpl-faq.html#MereAggregation). Whether or not this is the case would be a matter of looking at particulars; it is impossible to provide you with a blanket statement that would cover all conceivable cases.

The terms of the GNU GPL require that the source code for an executable be made available in one of the ways the GPL permits. If the Javascript is minified or obfuscated the GPL would require that the corresponding source code be made available. This is also very useful in cases where multiple Javascript libraries are being served minified and concatenated into a single document.

FSF has written a guide to releasing your Javascript as free software, available here: https://www.gnu.org/software/librejs/free-your-javascript.html

When the template code on the server and the Javascript are specifically designed for each other they may be considered mutually derivative works. The FAQ explains this situation.

The same rules apply in this situation as when one body of code makes a function call into another. Javascript is capable of making such calls as well as any other language. Whether or not they would produce a derivative is a matter of how the software was designed and what it is doing exactly when it makes the call (see the "mere aggregation" link above).

But it is also possible to call generically written Javascript from a document and pass information to that Javascript using a well-established public API. This would be an indication that the works may be considered separate. The answer would be dependent on an analysis of the particular case at hand.

Does FSF's point of view coincides with Mozilla's in that minified/obfuscated JS is not source code?

The FSF's view is codified in the terms of the GNU GPL. The GPL defines source code as the preferred form for making modifications to the work. This obviously excludes all forms of obfuscated or unreadable code.

I would also recommend reading: https://www.gnu.org/philosophy/javascript-trap.en.html 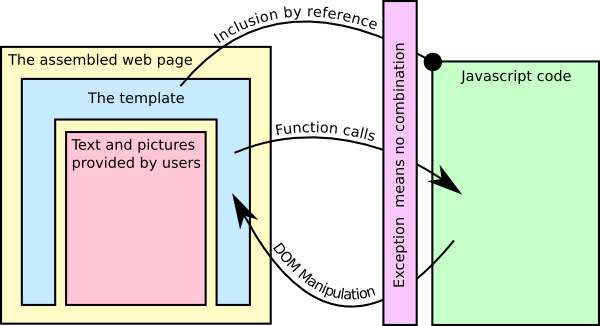 As a special exception to the GPL, any HTML file which merely makes function calls to this code, and for that purpose includes it by reference shall be deemed a separate work for copyright law purposes. In addition, the copyright holders of this code give you permission to combine this code with free software libraries that are released under the GNU LGPL. You may copy and distribute such a system following the terms of the GNU GPL for this code and the LGPL for the libraries. If you modify this code, you may extend this exception to your version of the code, but you are not obligated to do so. If you do not wish to do so, delete this exception statement from your version.

Thus, if I read this right, in case of presence of such a note it's a definitive no to points 1, 2 & 6. With 4 you'd probably have to release JS under LGPL. Absense of this note most likely means the opposite.

According to this, JS libraries in most cases may be cosidered separate programs, not binding each other.

But you can give additional permission for the use of your code. You can, if you wish, release your program under a license which is more lax than the GPL but compatible with the GPL. The license list page gives a partial list of GPL-compatible licenses.

This is contrary and would mean requirement to release under GPL-compatible license (in case of modules not necessary GPL itself).

It depends on how the program invokes its plug-ins.

This is just ambiguous.

So it really depends on what you consider JS to be and open to argument until GNU provides a specific point of view, but...

The “source code” for a work means the preferred form of the work for making modifications to it.

This definition (barring the quotes) is the same both for GPL 2 & GPL 3, making GNU's stance the same as Mozilla's - minified/obfuscated JS (which is common for libraries) is not source code, thus you must follow only distribution requirements (in most cases - providing a link to a library's page you used yourself).

Note, that I'm not a GPL specialist and just quoted some of the FAQ. Someone with a better knowledge of the license may provide a better answer.

Not the answer you're looking for? Browse other questions tagged gpl website or ask your own question.

8
Using GPL or LGPL licensed framework for web application
10
If a part of the client-side code is licensed under GPL, does the server-side code have to be under GPL as well?
7
What copyleft license should I use for my website's HTML/CSS/JavaScript?
2
Which license for a project combining MIT libraries and GPL modified files?
2
Can I use a GPLv3-licensed workaround for a chrome bug without disclosing the rest of my web page source code?
3
GPL3 "code" in css and html templates: Implications for books hosted on the web
0
What is really accepted as an open source project for GPLv3?

10
If a part of the client-side code is licensed under GPL, does the server-side code have to be under GPL as well?
8
How Does The AGPL Apply To Javascript Libraries?
0
Concatenating LGPL code
9
What are the details of this accusation regarding the "web app loophole"?
1
Is an app required to be open sourced when the app is using a GPL library created by the organization that created the app?
2
Licensing restrictions for a Wordpress site hosted online
37
Minified GPL code inside Javascript webapp
3
Consequences of html files being under GPL license