What are the philosophical differences between open source and free/libre software (if they exist at all)?

In the answers to this question it was shown, that a few licenses exist, that are only open source but not free software or the other way round. Still, most licenses are both or neither, so the overlap is very big.

But the communities around open source are distinctive and both strong, and some members of one community even disagree with the other. That seems strange for communities that are so similar in definition and goals. It points to a subtle philosophical difference the two.

So my question is: do such differences exist? And if yes: What are the differences in philosophy?

In addition to / Including @Michael Schumacher's answer.

Open source doesn't take Tivoization as issue while for Free Software, it is ethical/social problem: (Quoted form Why Open Source misses the point of Free Software)

The criteria for open source do not recognize this issue; they are concerned solely with the licensing of the source code. Thus, these unmodifiable executables, when made from source code such as Linux that is open source and free, are open source but not free.

The idea of open source is that allowing users to change and redistribute the software will make it more powerful and reliable. But this is not guaranteed. Developers of proprietary software are not necessarily incompetent. Sometimes they produce a program that is powerful and reliable, even though it does not respect the users' freedom. Free software activists and open source enthusiasts will react very differently to that.

A pure open source enthusiast, one that is not at all influenced by the ideals of free software, will say, “I am surprised you were able to make the program work so well without using our development model, but you did. How can I get a copy?” This attitude will reward schemes that take away our freedom, leading to its loss.

The free software activist will say, “Your program is very attractive, but I value my freedom more. So I reject your program. I will get my work done some other way, and support a project to develop a free replacement.” If we value our freedom, we can act to maintain and defend it.

Notable para from fear of freedom: 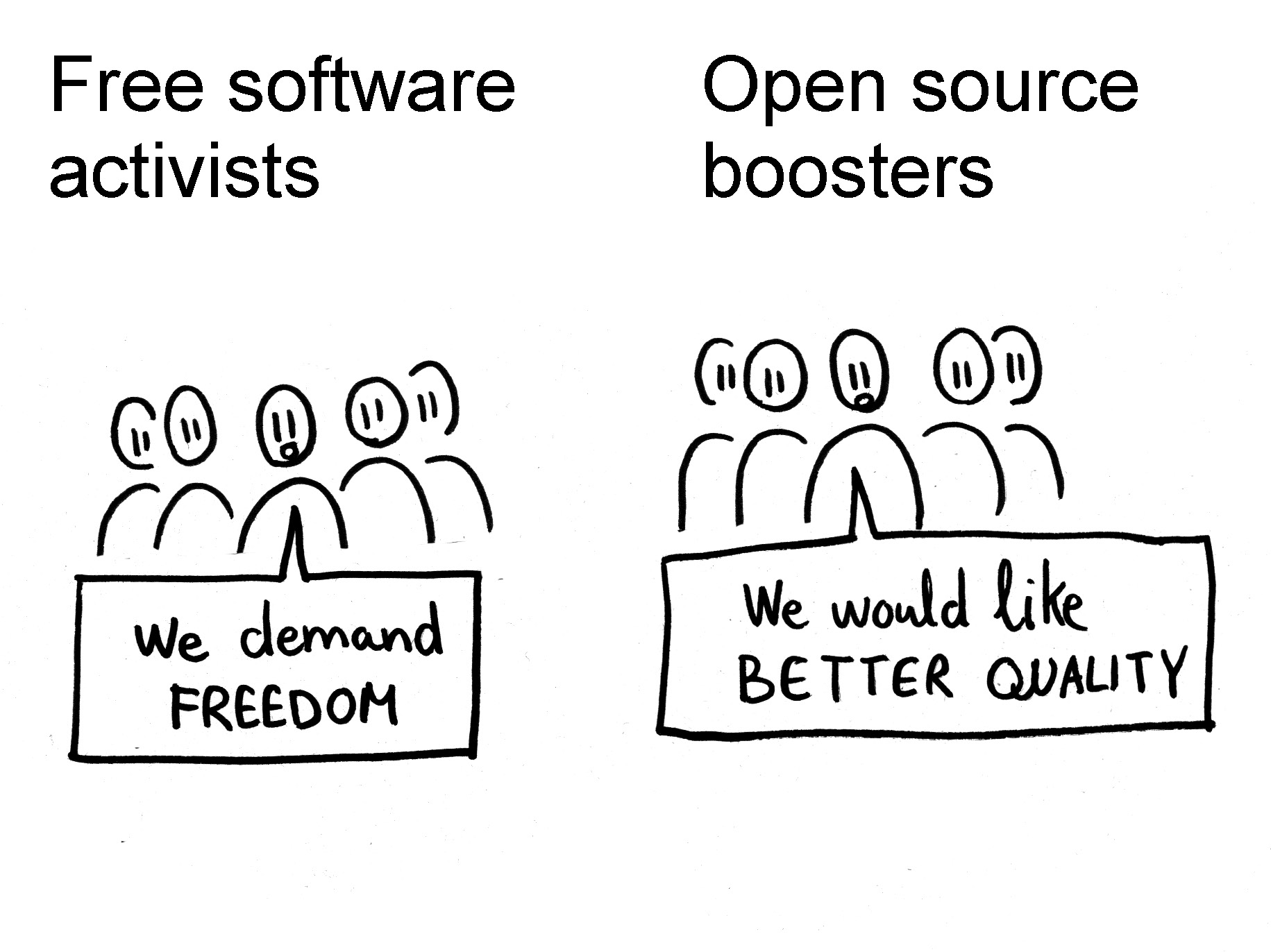 The mission of opensource says:

Open source is a development method for software that harnesses the power of distributed peer review and transparency of process. The promise of open source is better quality, higher reliability, more flexibility, lower cost, and an end to predatory vendor lock-in.

The conferees also believed that it would be useful to have a single label that identified this approach and distinguished it from the philosophically- and politically-focused label "free software."

The term "open source" was coined in 1998 by a group of people — the founders of the Open Source Initiative (OSI) — who also supported the development and distribution of free software, but who disagreed with the FSF about how to promote it, and who felt that software freedom was primarily a practical matter rather than an ideological one (see for example the entry "How is 'open source' related to `free software'?" from the OSI's original 1998 FAQ page).

Following the coining of the term "open source", some of those who adopted it did so because they too had philosophical differences with the FSF about the reasons why to promote such software, while others who adopted the term did so because of differences of opinion with the FSF about tactically how to support such software, even while sharing an ideological motivation. These two groups can and do overlap, of course, and some people use both terms, choosing according to context and audience.

Also categories of free and non-free software from this answer which graphically explains difference/overlap i.e how opensource is free (mostly) and non-free (rarely).

To me, the following part of the Why Open Source misses the point of Free Software article sums up the difference (emphasis by me):

Some of the supporters of open source considered the term a “marketing campaign for free software,” which would appeal to business executives by highlighting the software's practical benefits, while not raising issues of right and wrong that they might not like to hear. Other supporters flatly rejected the free software movement's ethical and social values. Whichever their views, when campaigning for open source, they neither cited nor advocated those values. The term “open source” quickly became associated with ideas and arguments based only on practical values, such as making or having powerful, reliable software. Most of the supporters of open source have come to it since then, and they make the same association.

The two terms describe almost the same category of software, but they stand for views based on fundamentally different values. Open source is a development methodology; free software is a social movement. For the free software movement, free software is an ethical imperative, essential respect for the users' freedom. By contrast, the philosophy of open source considers issues in terms of how to make software “better”—in a practical sense only. It says that nonfree software is an inferior solution to the practical problem at hand.

When we call software “free,” we mean that it respects the users' essential freedoms: the freedom to run it, to study and change it, and to redistribute copies with or without changes. This is a matter of freedom, not price, so think of “free speech,” not “free beer.”

Since the obvious meaning for “open source” is not the meaning that its advocates intend, the result is that most people misunderstand the term. According to writer Neal Stephenson, “Linux is ‘open source’ software meaning, simply, that anyone can get copies of its source code files.” I don't think he deliberately sought to reject or dispute the official definition. I think he simply applied the conventions of the English language to come up with a meaning for the term. The state of Kansas published a similar definition: “Make use of open-source software (OSS). OSS is software for which the source code is freely and publicly available, though the specific licensing agreements vary as to what one is allowed to do with that code.”

Source: Why Open Source misses the point of Free Software

A program is free software if the program's users have the four essential freedoms:

Therefore, every free software is open source software and satisfies all of its criteria. The reverse doesn't have to be the case.

Not the answer you're looking for? Browse other questions tagged philosophy or ask your own question.

21
Can a software license meet one of the FSF's and OSI's definitions without meeting the other?
7
Is there a universal definition of free software?

16
Is Open Source Software a subset of free software?
18
Why was open source as a term created, although free software was already established?
14
Is the capacity of open source developers an infinite resource?