Am I allowed to create a closed-source application using the LGPL licensing scheme for Qt if I use Qt Designer to generate its user interface?

I originally thought this was possible until I saw this section in their licensing comparison chart: 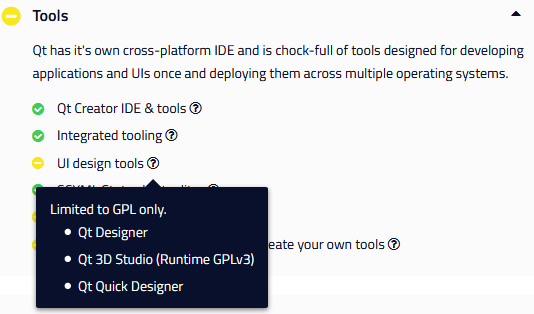 Now I still have some doubts, maybe this only applies to the Designer tool itself (in case I wanted to distribute it with my application) or just to the generated UI (xml files if I remember correctly)?

Yes you are allowed to do so. Qt Designer is available under not just GPL but "GPLv3 with The Qt Company GPL Exception 1.0"

Here is the exception:

Exception no.1 fully covers your question.

Here's the repository for Qt tools https://github.com/qt/qttools. There you can find the source code for Qt tools (including Qt Designer) and its licenses.

Not the answer you're looking for? Browse other questions tagged lgpl closed-source or ask your own question.

14
Is the output of an open source program licensed the same?