May I use AGPL license in a desktop application without providing the source code?

We develop a commercial desktop application that uses an AGPL library. The lib's code is just used, not modified. Our application runs completely offline.

May we use the AGPL library without having to make our application's code open source? As I understood it, this is allowed. But still I am not sure.

Does anyone know if my conclusion is right?

As Amon indicates, your use of the AGPL corresponds with use under the GPL. The FAQ from the Free Software Foundation on gnu.org is clear:

I'd like to incorporate GPL-covered software in my proprietary system. Can I do this?

However, in many cases you can distribute the GPL-covered software alongside your proprietary system. To do this validly, you must make sure that the free and nonfree programs communicate at arms length, that they are not combined in a way that would make them effectively a single program.

The difference between this and “incorporating” the GPL-covered software is partly a matter of substance and partly form. The substantive part is this: if the two programs are combined so that they become effectively two parts of one program, then you can't treat them as two separate programs. So the GPL has to cover the whole thing.

If the two programs remain well separated, like the compiler and the kernel, or like an editor and a shell, then you can treat them as two separate programs—but you have to do it properly. The issue is simply one of form: how you describe what you are doing. Why do we care about this? Because we want to make sure the users clearly understand the free status of the GPL-covered software in the collection.

An example: suppose that you have created an accounting app on the desktop, and that you need to create PDF invoices and PDF reports from this app. Suppose that you use an AGPL PDF library to create the PDF.

In this example, your own code defines the GUI, and it allows people to enter data that is stored in a database. When they click a button, PDF's are created using the PDF library.

That PDF library is considered being a part of the accounting app because the functionality of the library is triggered by an action of the end user in the accounting application (e.g. a PDF invoice is created when the end user clicks a button). You can't "work around" the copyleft license by saying: we separate the GUI part from the PDF generation part. It's all connected.

To make a long story short: your conclusion was wrong, because modification has a broader meaning than you initially assumed.

Update in answer to comments asking for proof of my claims:

Note: most of the comments I refer to were removed by their author.

The example of the accounting software and the PDF invoices wasn't chosen at random. I'm the original developer of iText, an open source PDF library released as AGPL software.

In June 2015, I discovered that iText was used in a closed source module that served as an add-on to closed source accounting software. This is the first thing I did: I went to a bailiff to document the infringement (June 12, 2015): 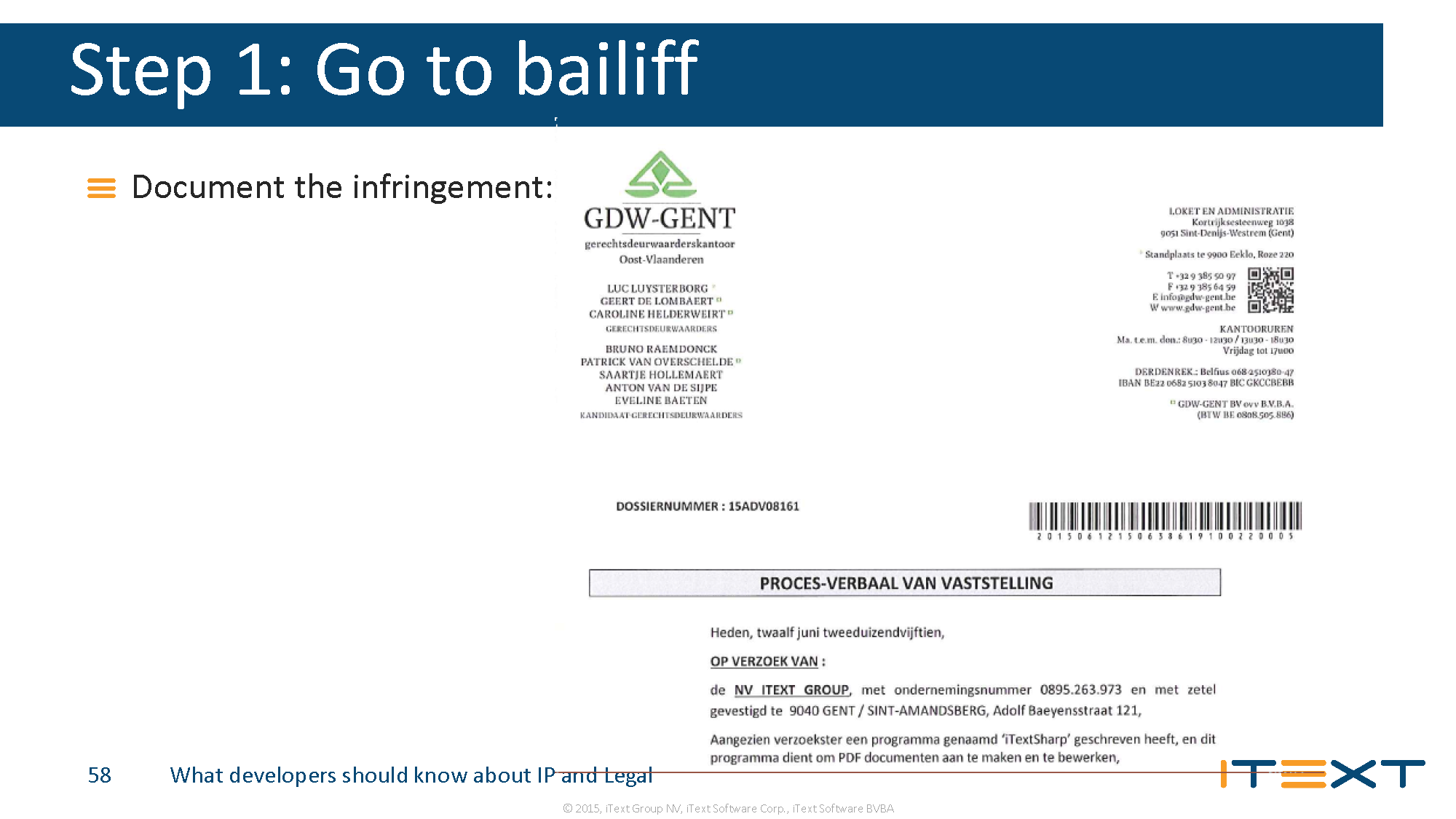 Then I went to a lawyer, who sent a cease and desist letter: 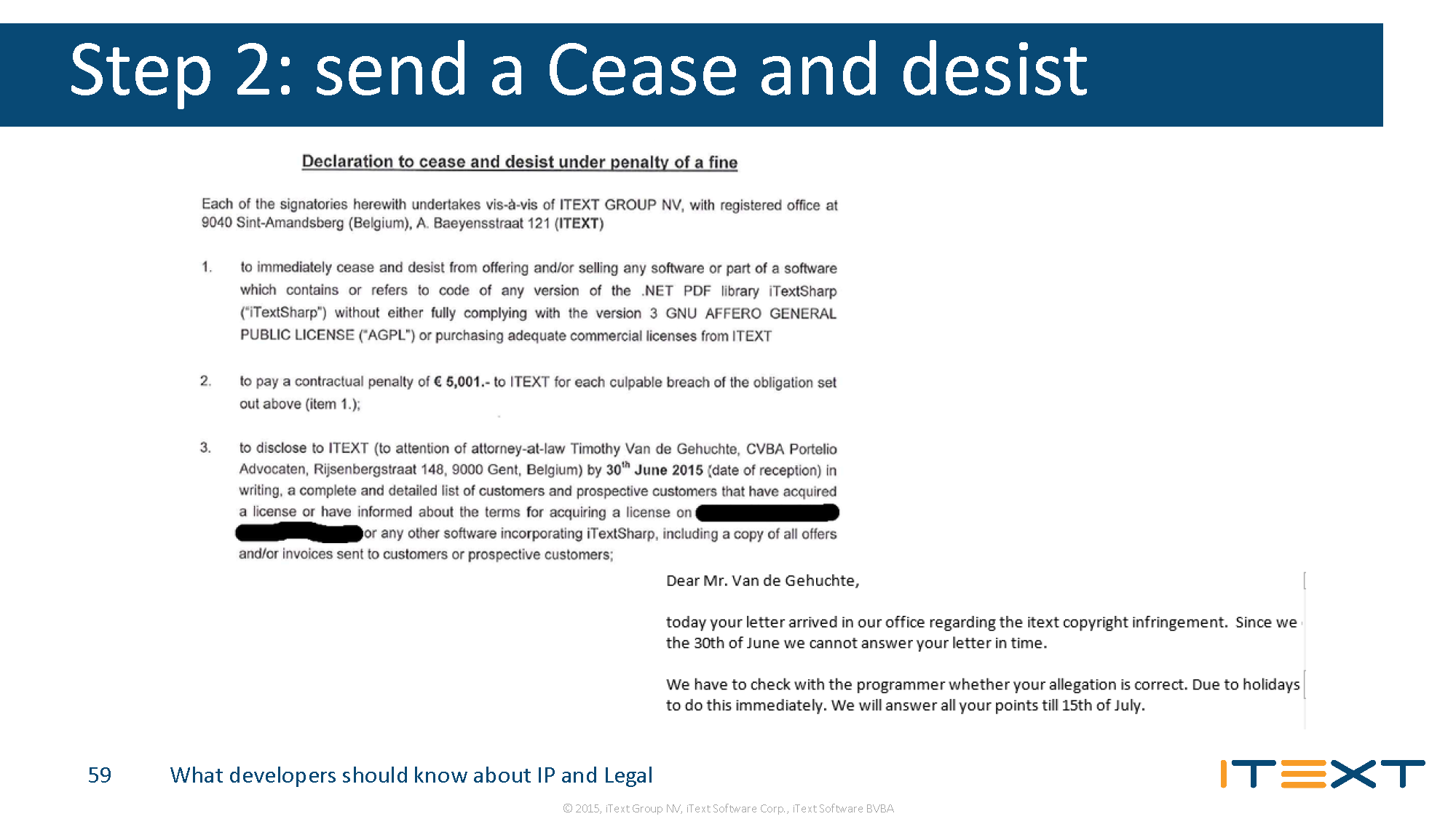 The infringing party stalled, and came back with false arguments (similar to some arguments made in the comments). 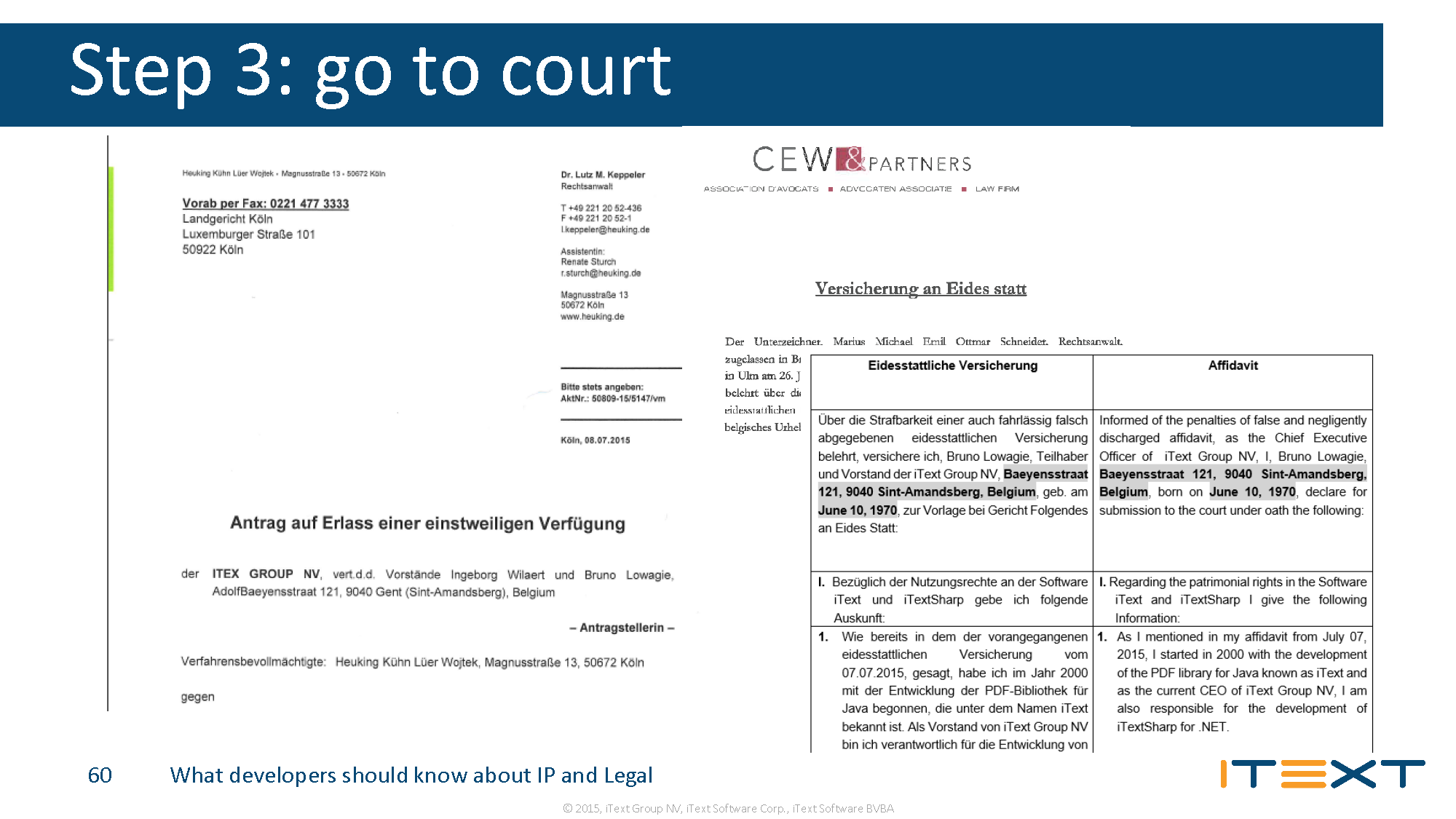 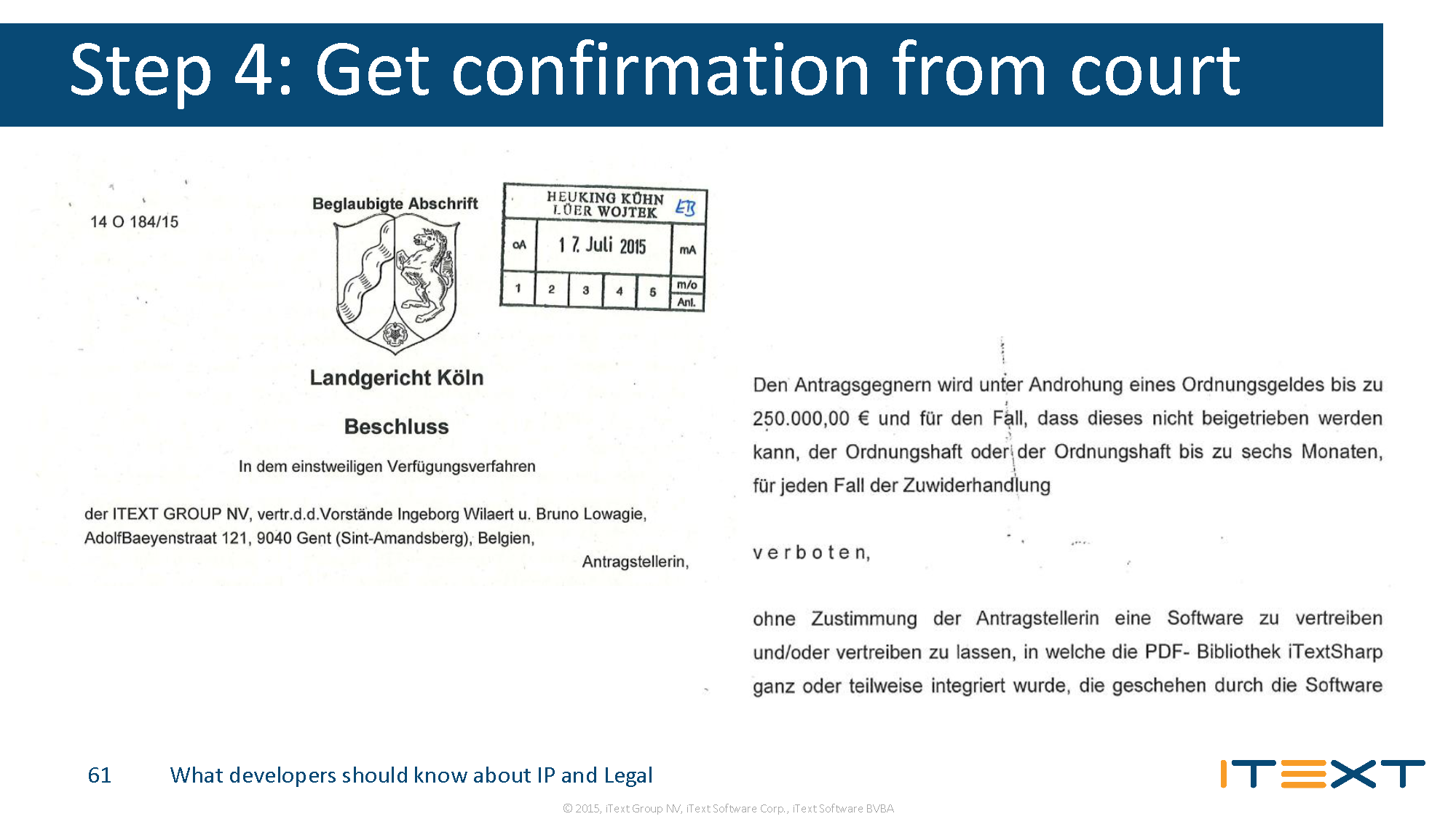 Eventually, the infringing party accepted the ruling of the court: 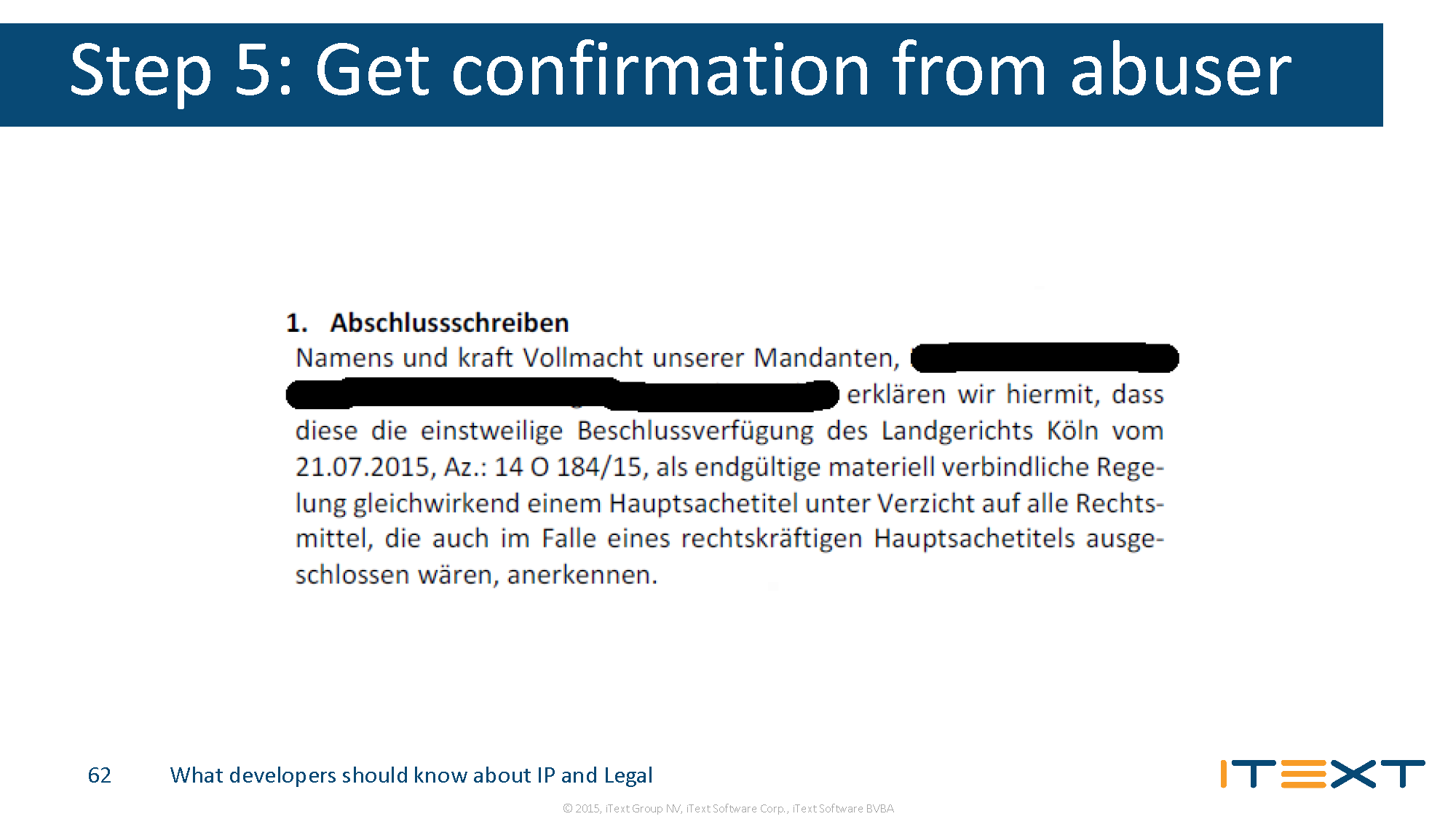 These slides were taken from my JavaOne talk IANAL: What Developers should know about IP and Legal (I won a JavaOne Rockstar Award with this talk).

In the comments, I read claims that this isn't an illustrative example because creating invoices isn't an essential part of accounting software. Landsgericht Köln didn't agree with that point of view. All software using the infringing module was taken from the market because the infringing party didn't want to open source it. Notice the word v e r b o t e n in the rulling. It was forbidden to distribute software that uses iText as a whole or in part without permission of the copyright owners of iText, given the fact that the copyleft of the AGPL wasn't respected.

Actually, being an essential part isn't even a criterium. In Artifex versus Hancom, the South-Korean company Hancom used Artifex's Ghostscript to create PDF output from documents created with their office suite. Creating PDF was an optional feature that wasn't essential for the rest of the office functionality to work. However, Artifex went to court, and a Californian judge issued a ruling that the GPL could indeed be enforced even in cases where the GPL code is only used for a small feature that isn't essential in the context of the complete work.

If user A pushes a button in product X, and by doing a technical effect is triggered that results in an action in (A)GPL library Y, then product X needs to be released under the same license as library Y to user A no matter how product X is technically implemented!

If you don't understand the difference between technical effect and technical implementation, consider this: suppose that person A wants to murder person X, but he hires person B to kill person X, then person A isn't technically the murderer of person X, but the effect is the same: person X is murdered because of person A, and for a judge person A will be guilty all the same (and usually get a higher sentence than person B).

If a counter-party tells the judge that the AGPL doesn't apply when you access an AGPL library from a closed source system through a service that is open sourced under the AGPL, feel free to use the "murder" comparison in court to explain why the judge should discard the technical details of such a workaround. You'll increase your chances at winning your case. Actually, the infringing party might get a more severe sentence because of the intentional attempt to avoid compliance with the open source license.

If you do not agree with the above, please document with existing cases that went to court. Please be aware of the fact that allegations that have not been proven in court have no value whatsoever.

Regarding the first example: I am the original developer of iText, an AGPL PDF library, and I wrote most of the Affidavits that were used in the case documented with the screen shots above.

Regarding the second example: I was consulted by the CEO of Artifex for advice in December 2016, and by Hancom in the Summer of 2017. Eventually, the case was settled.

I have quite some firsthand experience in matters like these, and it's quite disappointing to see how many developers are interpreting the law in a way that best suits the open source user, going against the rights of the open source producer. I would expect developers to stand up for each other, and respect the rights of their fellow open source developers. In my experience however, decision makers at a company have a better understanding than the company's developers. Management usually makes much less of a problem of the dual license system that allows their company to use software under a commercial license in cases where the company can't comply with the copyleft license.

The GPL license family consists of three kinds of licenses:

In your case, you have a desktop app so the AGPL is equivalent to the GPL. If you want to use the AGPL code, you will have to license your application under the AGPL and offer the source code for that app.

I believe the answer provided by amon is accurate regarding the effect of using [AL]GPL licensed software as part of your software, however there is a 'loophole' of sorts, in that it is legal for software developers to 'dual license' their software, so you should check if there's a second license that you can choose to use instead, or if there is an option to purchase a license that gives you permission to use it in your closed source software.

Not the answer you're looking for? Browse other questions tagged or ask your own question.

5
How can I include two open-source libraries in my commercial applications?
4
Web service licensed under AGPL - distribution
2
Proprietary desktop application that works with AGPL-licensed server application
9
Optional GPL dependency in commercial Python application
2
Using iText library with AGPL license to make application open sourced
3
A library that is licensed differently on client and server
8
If I use a public API endpoint that has its source code licensed under AGPL in my app, do I need to disclose my source?
3
LGPLv2.1: Distributing dynamically linked executable without the LGPL library
6
PDFs with proprietary fonts in test suite of (A)GPL software
0
Do we have to choose the GNU LGPL v2.1 license libraries for our distribution?