Using GPL licensed library over a service for non-GPL softwares

Can I use this library indirectly using a wrapper service(can be a windows service, web service, rest api etc.) ? This wrapper service will provide a generic interface to utialize this library and will be licensed with GPL. Any commercial software can communicate with this service using its plugins.

Lets explain through the figure below. 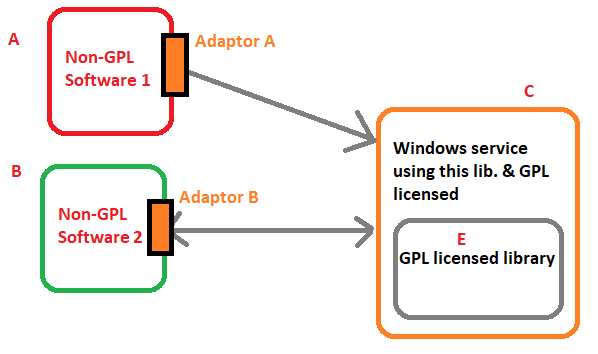 Is this scenario appropriate? Is there any proper way to achive my problem ?

How should I distrubute Adaptor A/B ? Are they need to be GPL licensed ( A/B distrubuted with an .exe file to installation without containing adaptors)

Lastly, what is the way of I distributing C and mentioning in my commercial applications to tell users to install it and integrate with other applications. (I can specify with a description that explains how to utilize C service for the A/B users. Also I can make C program source and installation file available on my server for download.)

IANAL/IANYL. That said, the devil, as usual, is in the details, and you don't give us much information about how these adaptors work.

If, instead, the adapter uses userspace as a mediating tool (eg, B puts files on the file system, then the adapter moves them into C's bit of filespace and calls C through fork-and-exec to deal with them, or C runs as a daemon that periodically checks whether there are new files to deal with), then B and C are separate works for copyright purposes, and you don't have a problem.

The one about your obligations with respect to C is pretty well covered elsewhere, but in brief, if you tell your users that they must download and install it, and you make both source and executable available from the same place on your website, that would suffice. If you distribute C directly to them, your obligations with respect to source provision are a bit more extensive, but not much so.

Edit: you have clarified that both A and B adapters will interact with C via HTTP. Provided they do this using RFC-standard HTTP operations (POST, GET, etc.), that seems likely to me to be at arm's-length enough to make them separate for copyright purposes; certainly my web browser doesn't need to know about the GPL status of the web servers with which it interacts. If they're thus separated, then A and B adapters can be proprietary software which you distribute along with A and B.

I'm still a bit nervous about "Adaptors will use the data contracts that provided by C. So, Adaptors needs to know what data models are supported on C operations", because I don't understand what you mean.

Edit 2: given your subsequent clarification, it depends on how knowledge of the structures is acquired. Generally, if there is a separate written specification, and you implement this de novo in your code, all is likely to be fine (there has been at least one attempt to claim that an API can be copyrighted, but it wasn't hugely successful). If there is no separate written specification, and you read (in your example's) Amazon's library code to work out what the API is, or worse still, use their code as a basis for your own, there is a problem.

I note that you have yourself written C, wrapping it around the pre-existing GPL library E. That puts you in a position to write that specification, but not to implement it. Clean-room practice is that person A reads the "contaminated" code and writes the functional spec, and a person B implements that spec, without any further reference to person A. You cannot be both of those people.

Note that this whole analysis assumes that linking creates derivative works, and as we note elsewhere, this is not yet a certainty; arguments can be made both for and against the issue. It is generally accepted, however, that interaction-through-userspace keeps two programs far enough apart that neither is entangled by the other from a copyright point of view.

Not the answer you're looking for? Browse other questions tagged gpl commercial gpl-2 plugins or ask your own question.

6
For Software based on GPL library should I have to release software under GPL license or can I use MIT
5
Hosting (potentially) non-GPL plugin's
7
Using GPL resource (with separate installation) with "commercial" product
5
GPL Application <-> LGPL Plugin <-> Properietary code
2
Does interacting with a (L)GPL licensed library through PHP7.4 FFI count as a derived work?
1
Can I use GPL-licensed services embedded in an iframe from a commercial application?
2
Using a library that is wrongly licensed
1
Using GetText (GNU) license in a commercial product (For now SaaS)?