How does Bootstrap v4 (MIT) deal with contributions made under v3 (Apache 2.0)?

Then, if I contributed the modified program inherited from Bootstrap version 3, would Bootstrap core team deal with my contribution as the one under Apache license 2.0?

And subject to Apache license 2.0, do my company and its affiliates have to grant patent license to Bootstrap core team and users relevant to my contribution? 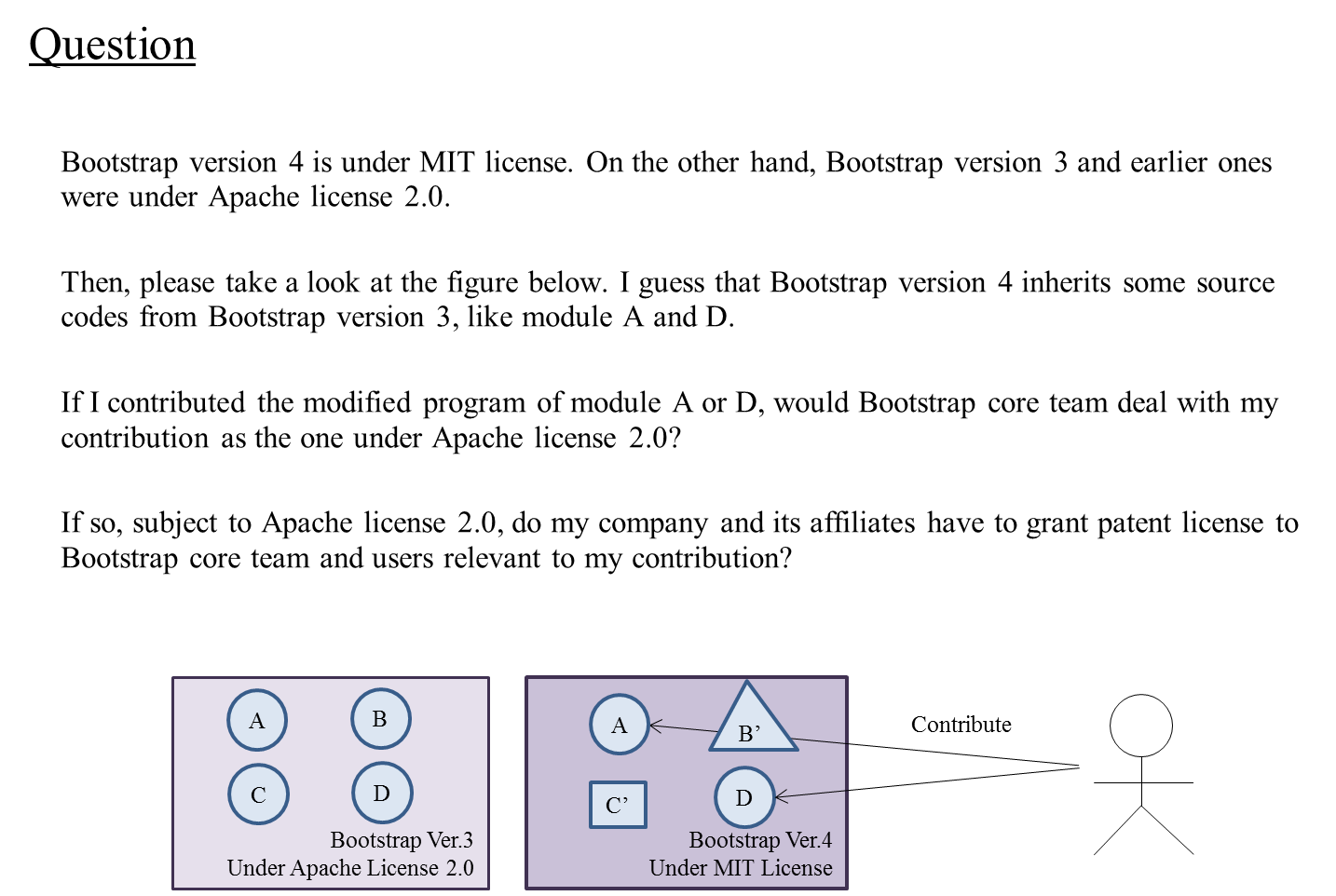 With v3.1, we're moving from the Apache 2 to the MIT license for the Bootstrap code (not the docs). We're in the process of collecting permissions from all Bootstrap contributors with code still part of the project to make this happen. For details, please see #2054.

By contributing your code, you agree to dual-license your contribution under the Apache 2 and MIT licenses.

So Bootstrap v4 contains 100% MIT-licensed code (the docs are licensed separately). Some components may have previously been subject to the Apache License 2.0, but their copyright holders have since agreed to relicense them under the MIT license.

If you publish MIT-licensed code you do not issue a patent license in the same sense that the Apache License 2.0 does. In particular, you do not benefit from the protection of the retaliation clause. (Under the Apache License 2, if someone sues you for patent infringement with regards to the licensed work, their license to the patents through that work is terminated.)

However, by releasing your code into the public with an open-source license you are demonstrating an intent for others to use this code. If that is only possible with patents that you own, that might be an implied patent license.

24
Can I link a Apache 2.0 library into software under GPLv2?
21
Against what does the Apache 2.0 patent clause protect?
5
How does the Apache 2 license's patent grant interact with third-party patents?
7
Do I lose the right to use my patent after contributing to a project with Apache License 2.0?
12
Proper way of “migrating” MIT-licensed code to Apache 2.0 License
4
What is the difference between the Apache License v2.0 and the BSD+Patent License?
2
Relicensing from Apache-2.0 to Apache-or-MIT
4
How to label and license Derivative Works made under Apache License, Version 2.0?
2
How should copyright notices be included when distributing source of modified Apache 2.0 code commercially?
1
Apache-2.0 and MPL-2.0: To what extent does "license termination when instituting litigation" applied?