What does 'terms that are compatible with the GPL' mean?

Code written using Octave's native plug-in interface (also known as a .oct file) necessarily links with Octave internals and is considered a derivative work of Octave and therefore must be released under terms that are compatible with the GPL.

A program that embeds the Octave interpreter (e.g., by calling the "octave_main" function), or that calls functions from Octave's libraries (e.g., liboctinterp, liboctave, or libcruft) is considered a derivative work of Octave and therefore must be released under terms that are compatible with the GPL.

Here, 'terms that are compatible with the GPL' appears repeatedly.

At first, I thought that it can be any license in the list of GPL-compatible licenses. However, the part of "... is considered a derivative work of Octave and therefore must be released under terms that are compatible with the GPL" confuses me.

As far as I know, derivative work of GPLed one should follow GPL itself, not compatible one.

What are 'terms that are compatible with the GPL'?

This advice from the Octave project is in line with the GNU project's own FAQ:

You have a GPL'ed program that I'd like to link with my code to build a proprietary program. Does the fact that I link with your program mean I have to GPL my program?

This FAQ item directly applies to your case, but doesn't fully answer your question by itself, so I'll explain further.

The GPL imposes a particular set of requirements on the distribution of derivative works. Importantly, a few of those requirements include:

So, your own creative work may be licensed under any terms that do not cause issue when they are "upgraded" to the terms of the GPL as part of the combined work (original GPL work + your work) that you distribute. In other words, you may license your work with terms that are a subset of the GPL terms.

Visually, we can show how the terms of your work (left) combine with the GPL terms of the original work (middle) to create the combined terms (right): 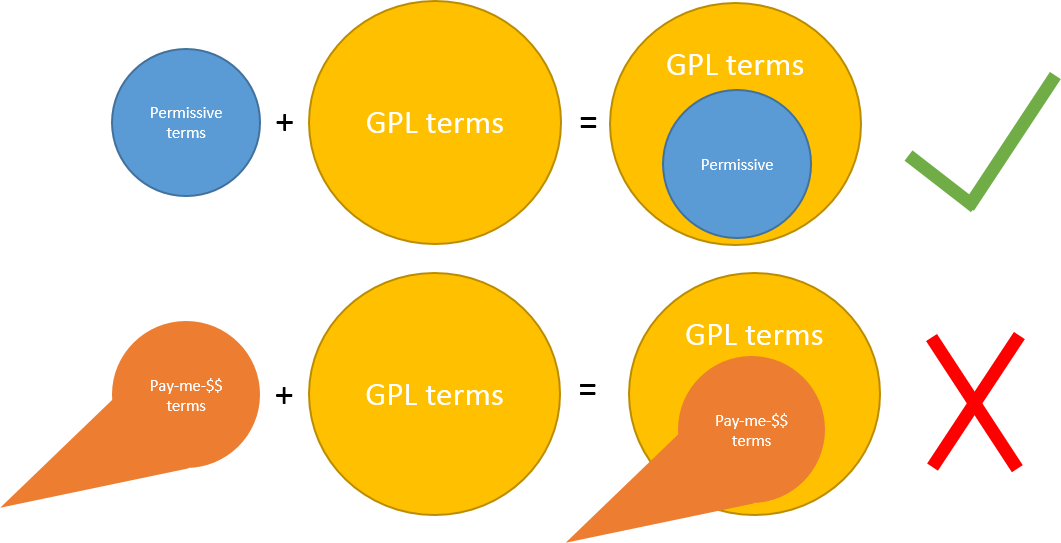 There is a genuinely subtle point here. It's easy to misunderstand - I am on record myself around these parts misunderstanding it.

But your work may be under any licence you like, as long as it doesn't conflict with the requirements of GPLv3 including the requirement that the licence covering the derivative work be GPLv3 (or later). That is what is meant by a licence's being compatible with GPLv3.

If your work is simply a set of changes to Octave, it won't make any sense for you to distribute them separately. But if your work were (say) a plugin "written using Octave's native plug-in interface", then it might stand as a work in its own right, and you could choose to distribute it on its own under eg Apache 2.0. Someone who received a copy of your work under those terms and re-combined it with Octave would still, of course, have to release that derivative work under GPLv3, as would you if you were to redistribute the derivative work. But someone who, say, received a copy of your work under Apache 2.0 and used it to create a standalone work in C would not be so obliged, and could release their combined work, including their changes, under eg Apache 2.0, if they so chose.

Licenses can be implicitly compatible. I can take software licensed under A and use it under the terms of license B if B doesn't given me any additional permissions that A doesn't include, and if by complying with the B license I also satisfy all requirements of the A license.

E.g. we can relicense software under the MIT license to the GPLv3. This is possible because the MIT license explicitly allows sublicensing, as long as the copyright+license notice is kept in tact. The GPLv3 allows you to require such notices to be kept intact by adding additional terms under 7.b), so this license transition is compatible.

Licenses can also be made compatible explicitly by mentioning this in the source license. E.g. the GPLv3 explicitly allows software under the GPLv3 to be combined with AGPLv3 software. The GPLv3 is also compatible with later versions of the GPL iff the copyright holder “activates” this feature. This is the case for GNU Octave:

GNU Octave is free software; you can redistribute it and/or modify it
under the terms of the GNU General Public License as published by
the Free Software Foundation; either version 3 of the License, or
(at your option) any later version.

(from the GNU Octave README)

While the GPL does state that modified versions must be licensed under the GPL, we can use the GPL-licensed software under the terms of a compatible license and are then bound by that license instead.

So it seems there are three kinds of possible licenses for GNU Octave plugins or programs embedding GNU Octave:

Not the answer you're looking for? Browse other questions tagged licensing gpl license-compatibility or ask your own question.

17
With GPL, what does "source code" mean for non-software?
17
What are the arguments for considering dynamic links to constitute derivative works?
13
Is Stack Exchange's CC-BY-SA v3.0 content compatible with the GPL?
6
Can an interpreted program be under any license without restricted by its GPL'ed run-time environment?
13
Can a non-GPL python program use GPL Python module?
15
How is the BSD GPL-compatible?
4
Can your MIT library use an LGPL library?
5
Does distributing GPL software along with binary image force the binary image to be GPL too?
2
Why is the GNU GPL v3 compatible with the Apache License v2.0?