AGPLv3 source redistribution: when does it apply to my code for a server-side Java app using an AGPL-licensed library?

I have written a Java program designed to run server-side with a plain HTML web interface:

In each of the following cases, would I have to redistribute the source code of my own application and of this library per the AGPLv3?

There are several Q&A about the AGPLv3 on this site and some answers are sending vague or mixed signals. Here is a (hopefully) clear and definitive answer with references.

First the AGPLv3 is essentially the same license as the GPLv3 with the addition of Section 13 as you can see in this side-by-side diff of the two license texts:

Notwithstanding any other provision of this License, if you modify the Program, your modified version must prominently offer all users interacting with it remotely through a computer network (if your version supports such interaction) an opportunity to receive the Corresponding Source of your version by providing access to the Corresponding Source from a network server at no charge, through some standard or customary means of facilitating copying of software. [...]

The intent of this new section is spelled out clearly in the preamble (bold emphasis is mine):

The GNU General Public License permits making a modified version and letting the public access it on a server without ever releasing its source code to the public.

Now let's look at which parts of the AGPLv3 are triggered in your four cases:

Therefore per Section 2 in all three cases (bold emphasis is mine):

This License explicitly affirms your unlimited permission to run the unmodified Program.

And therefore since you did not modify it, the section 13 is not triggered.

(as defined in section 0)

To "propagate" a work means to do anything with it that, without permission, would make you directly or secondarily liable for infringement under applicable copyright law, except executing it on a computer or modifying a private copy. Propagation includes copying, distribution (with or without modification), making available to the public, and in some countries other activities as well.

You are clearly only conveying in case 3. In case 2, you are propagating but not conveying as there is no transfer of a copy.

(as defined in section 0) (bold emphasis is mine)

To "convey" a work means any kind of propagation that enables other parties to make or receive copies. Mere interaction with a user through a computer network, with no transfer of a copy, is not conveying.

You also mention that this library takes your data and create some report format. I will assume that therefore the output is not subject to the license of the library itself and this part of Section 2 does not apply in your case:

The output from running a covered work is covered by this License only if the output, given its content, constitutes a covered work.

Finally, in all cases your application is combined and depends on the AGPL-licensed library and I would consider that its copyleft extends to your own source code.

But when is the copyleft effectively triggered in these cases? (and of course the copyleft requirement to eventually redistribute the source code of your own application?)

Since you are using the library unmodified, the key is whether you are either propagating or conveying or both

1. when I run this application on a private company network and its is only available internally to my company?

In this case, you are using the library internally unmodified, without neither conveying nor propagating: And per Section 2

This License explicitly affirms your unlimited permission to run the unmodified Program. [...] You may make, run and propagate covered works that you do not convey, without conditions so long as your license otherwise remains in force.

This is all I have to say about your case 1: you do not have to make any source code redistribution of your own code using this library and of this library in this case.

2. when I run this application on a public web site on the open internet?

You are using the library unmodified, and there is no built-in Section 13 corresponding source code download mechanism. In this case you are propagating but not conveying. Therefore none of the Section 4, Section 5 and Section 7 apply here. In this context, the AGPLv3 is not different from the GPLv3. This is like running an unmodified GPLv3 program that you call from your own code on a publicly accessible web server backend. The copyleft is NOT triggered in the sense you do not have to make any source code redistribution of your own code or of this library.

3. when I redistribute this application as a packaged software product to possible customers?

You are using the library unmodified and there is still no built-in Section 13 corresponding download mechanism (but that mechanism would not matter much in this case).

Here you are propagating AND conveying. Therefore the Section 4 applies. In this context, the AGPLv3 is still not much different from the GPLv3. You are redistributing an application that is based on the unmodified AGPLv3-licensed library.

And the copyleft is triggered: you have to make a redistribution of the corresponding source code of both your own code and this library. In this case, this could also cover Tomcat, though Tomcat may also be treated as a "System Libraries" per Section 1.

4. What if in my case 2. the author of the library insist that the copyleft is triggered even if I am using the library unmodified and that I must redistribute the whole source code, including my own?

In this special case you should never ignore this interpretation (even though it looks clearly incorrect based on the facts I presented here) and you have two options:

Finally let me provide some additional quotes supporting this answer:

I'll answer only point 2 because this is the core of the question. Basically the question is: if I am building a public facing Java app on a private server and this app uses an AGPL library unmodified, am I impacted by section 13 of the AGPL license?

This section starts with "if you modify the Program" so it boils down to deciding whether use of a Java library inside a Java app counts as modification of the library. Your interpretation is that this is not modification because the library itself was not modified. I think this is an incorrect interpretation which is caused by the use of the term "modify" while section 5 of (A)GPL talks about "a work based on the Program". However these two must be interpreted exactly in the same way because they are defined in the same paragraph of section 0:

Consequently, the usual consideration about what it means for a work to be based on another work applies and you very well know that the FSF's interpretation of this includes linking to a library.

I'll conclude by saying that Google probably agree with this answer because they have a special page dedicated to AGPL where we can read:

Using AGPL software requires that anything it links to must also be licensed under the AGPL.

I think your answer isn't complete. I will try to explain why using simple language (no legalese) and a specific example.

Do you need to disclose your own source code?

Suppose that you are using your application in batch. Every day, you create all the invoices of the previous day, and you store them on a server. People who want to see their invoice can go online and get their invoice from that server.

In that case, you can use iText without the AGPL kicking in, because you are using the library in a completely isolated way: you are not distributing it at all, so there is no source code to distribute either.

You don't create the invoices in batch, but you create them on-the-fly: e.g. whenever a user buys something, he triggers a process that creates a PDF. That process involves iText code to be executed. If iText were GPL, you wouldn't have to distribute your code, because you are not distributing a copy, but since iText is AGPL, copyleft applies:

Copyleft gives every person who receives a copy of a work permission to reproduce, adapt or distribute the work as long as any resulting copies or adaptations are also bound by the same copyleft licensing scheme.

Your derived work (e.g. creating PDF invoices) is an adaptation of iText (creating PDFs) and your work is bound by the same copyleft license.

In court, a judge will look at the involvement of the user.

This is not my opinion, this is how it has been taught to me by different lawyers such as (Crealaw, Stibbe, Portelio).

See for instance the following slides by CreaLaw:

Software is covered by copyright law. The GPLv3 grants rights to users if they meet specific conditions: 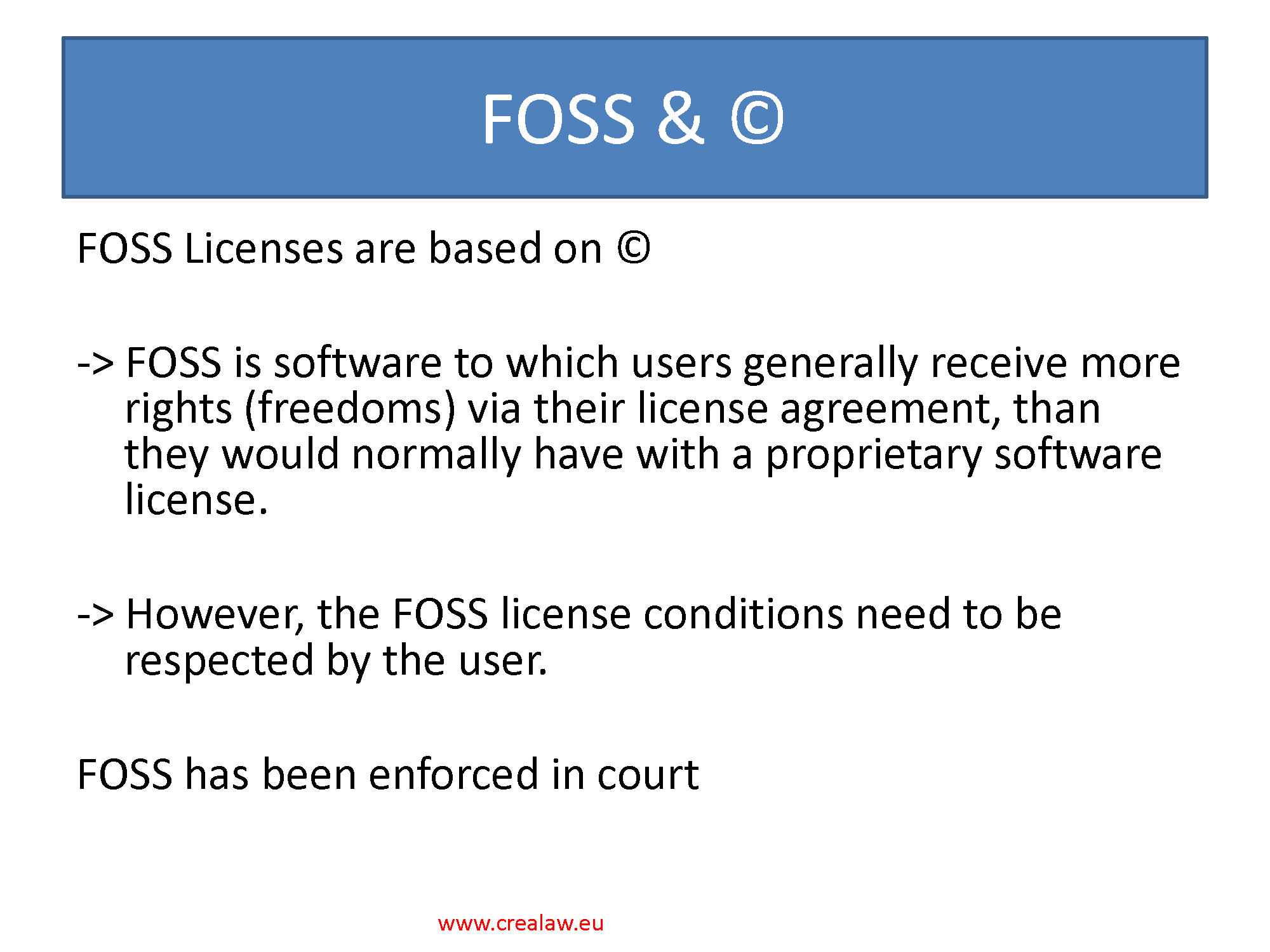 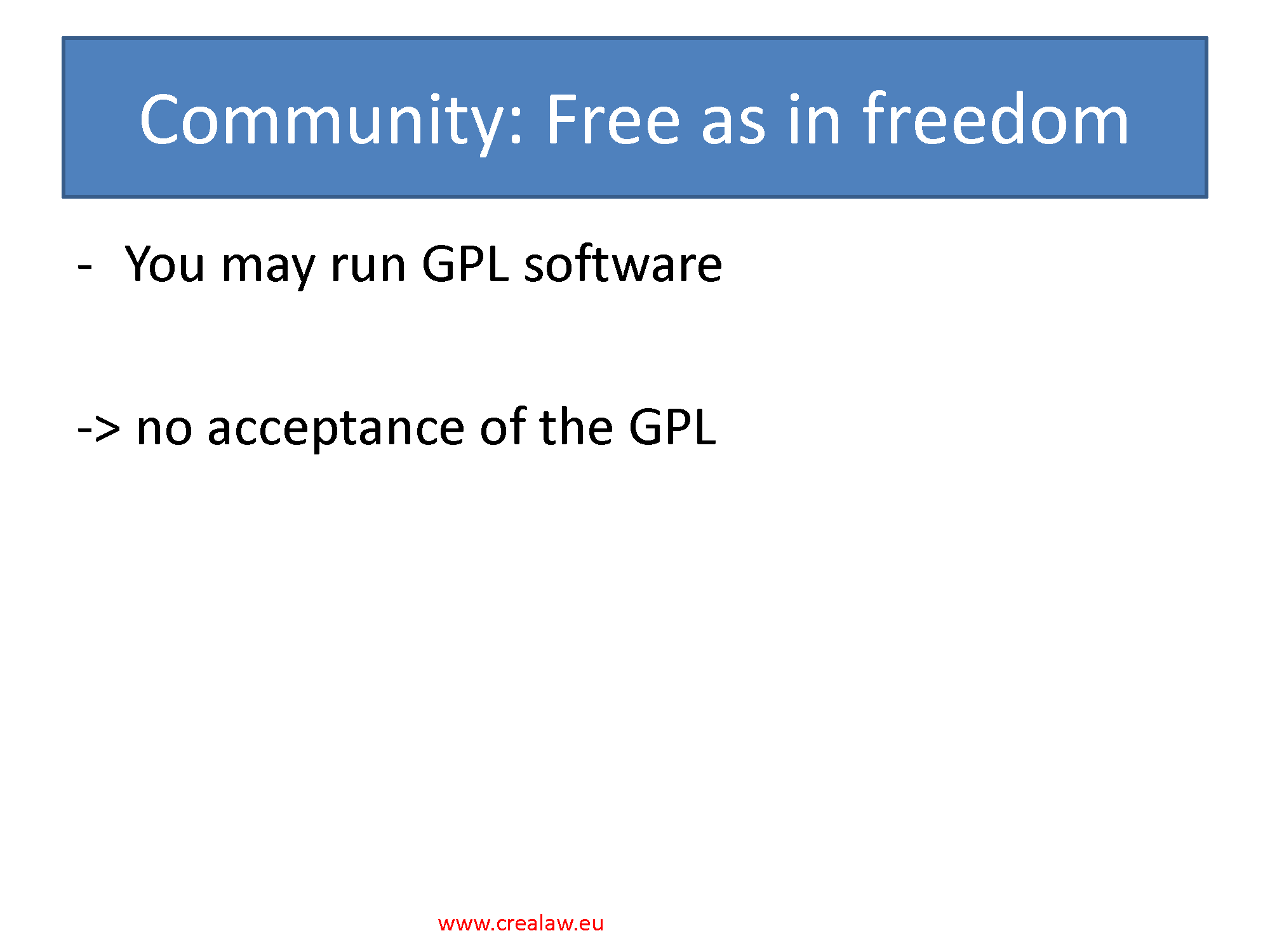 However: integrating GPLv3 software into an application, distributing,... can only be done if the GPLv3 is accepted. 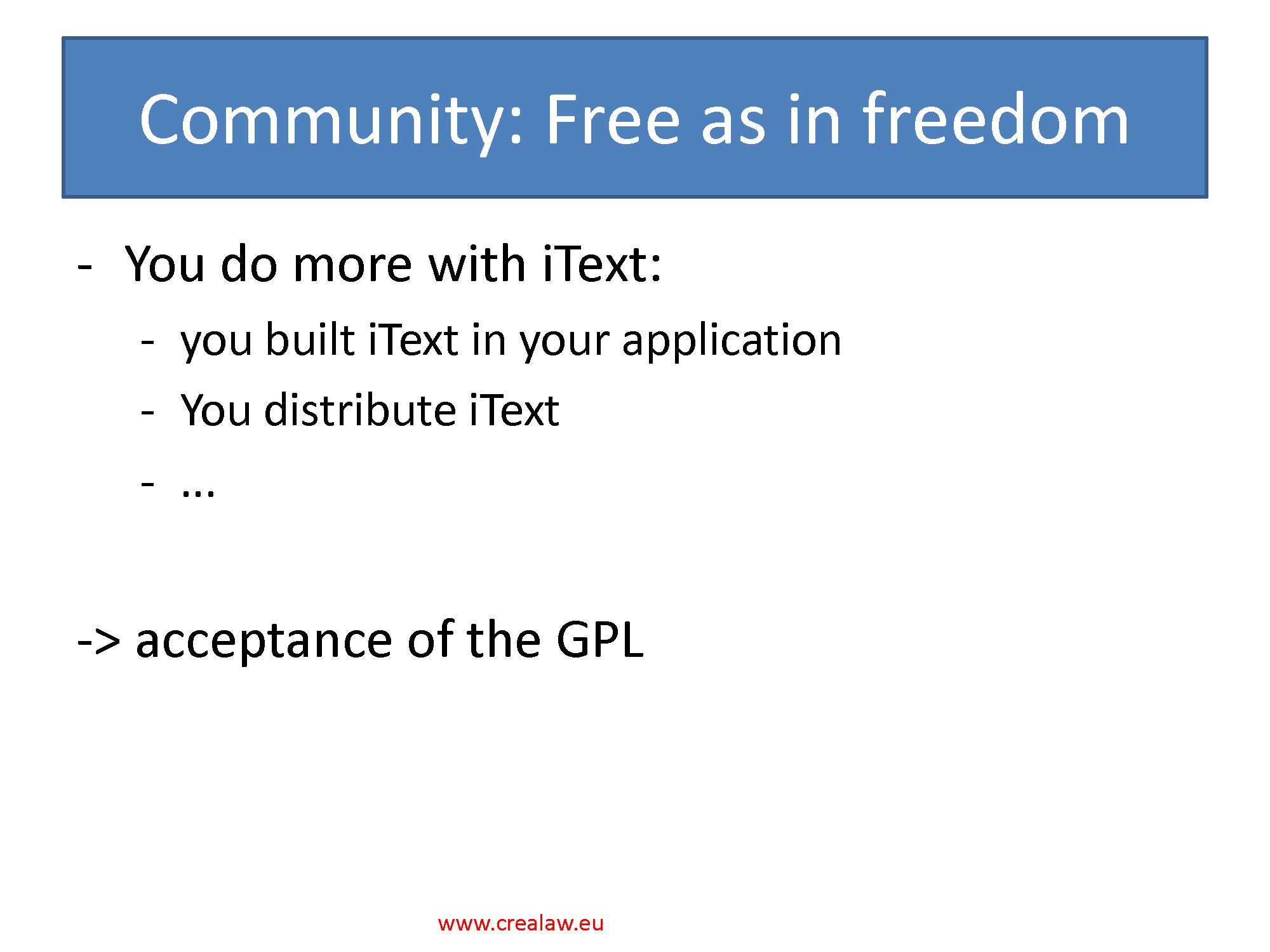 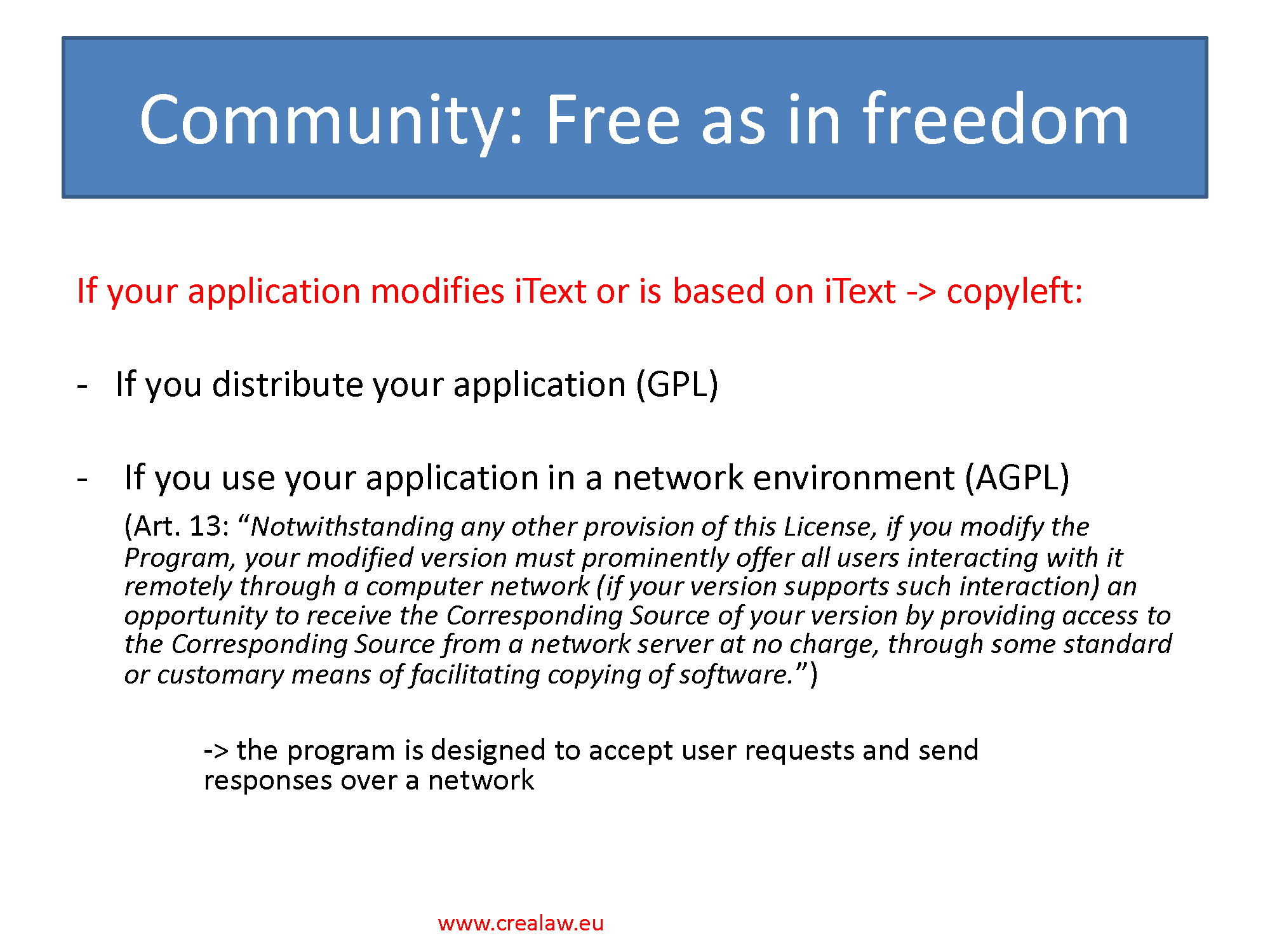 In this case, you must distribute your application under the (A)GPLv3: 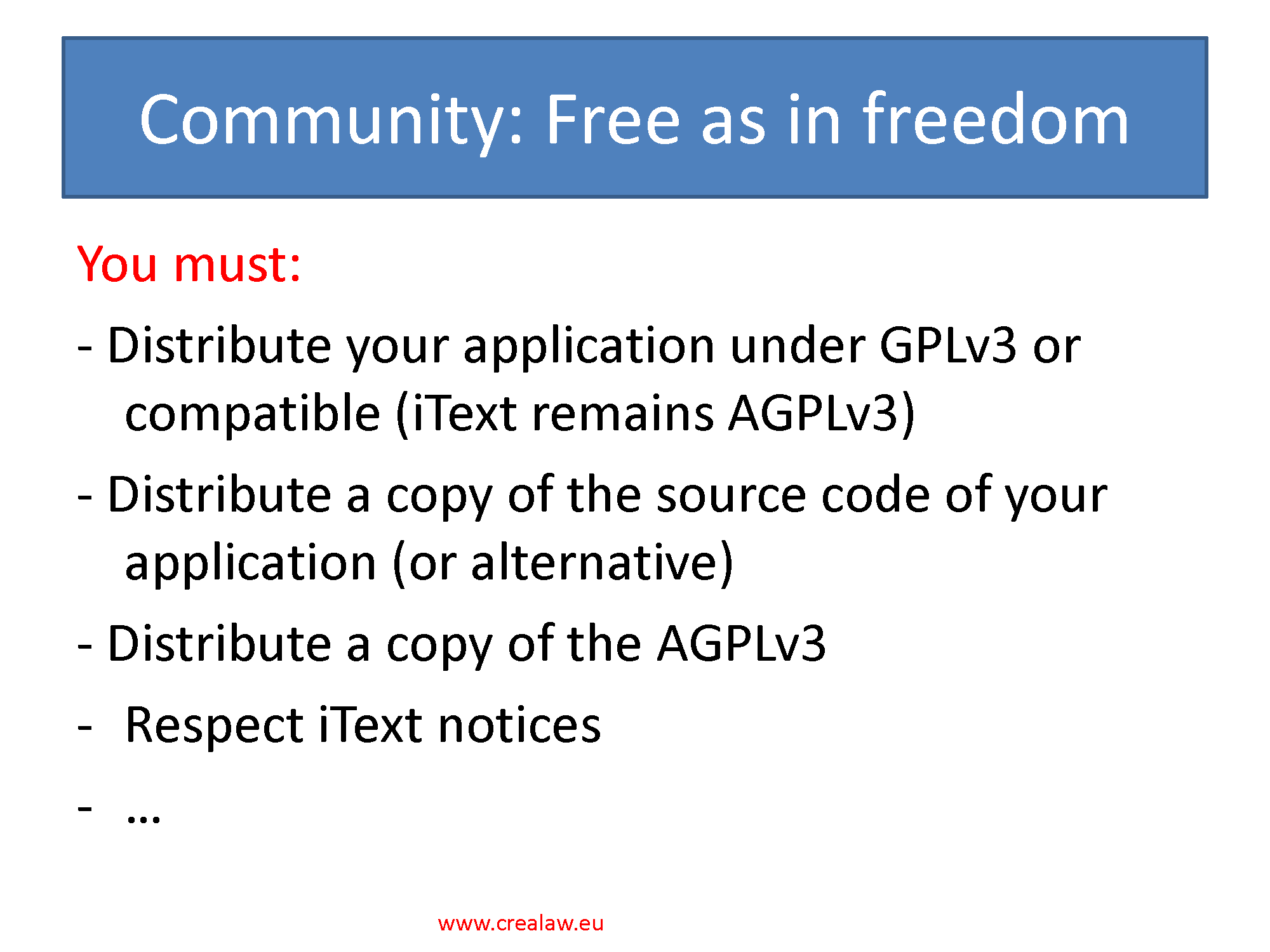 This is inherent to the concept of copyleft.

Suppose that what I wrote wasn't true, then it would be possible for AGPL software to become part of closed source software. That goes against the spirit of the FSF.

Not the answer you're looking for? Browse other questions tagged licensing agpl-3.0 source-code redistribution or ask your own question.

27
Do I have to offer the source of an AGPL (v3.0) licensed Web app even if I didn’t modify it?
7
Can I use the middleman loophole to reduce AGPL to LGPL?
1
Using iText library with AGPL license to make application open sourced

1
Distributing App for free which uses GPL'ed code
7
Can I use the middleman loophole to reduce AGPL to LGPL?
3
GPLv3 redistribution: when does it apply?
12
Does the AGPL help to protect against closed source if the application is run on a remote server and proxied by a separate service?
1
AGPL/LGPL licensed app usage in proprietary software
5
AGPL licensed app, but only available with payment?
5
Does using an AGPLv3-licensed library prevent me from dual-licensing my own source code?
8
If I use a public API endpoint that has its source code licensed under AGPL in my app, do I need to disclose my source?
3
Can the original Author keep his GNU AGPLv3 licensed code private if it is hosted on a server accessible to an entire university?