I've been searching around a little bit for statistics on how many projects are licensed with a licence file in their repository. I found this article with a graph: 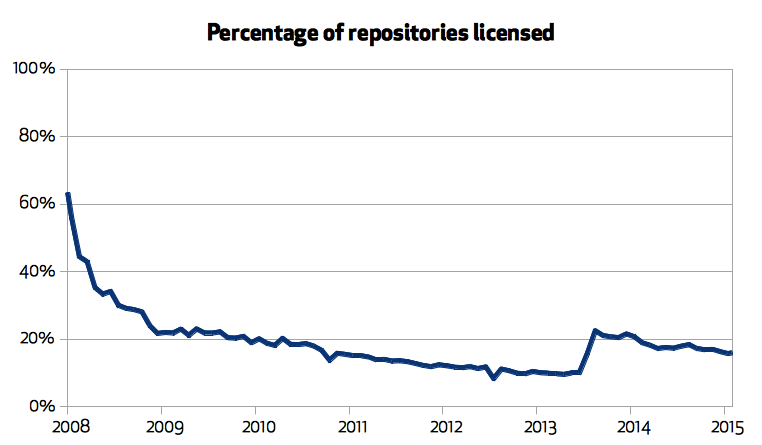 The spike between 2013 and 2014 can largely be attributed to the unveiling of choosealicense.com by GitHub.

Quoting from the article:

The new Licenses API returns metadata about popular open source licenses and can detect a project’s license from the repository’s LICENSE file. Developers are welcome to preview the API while it’s still under development. Ultimately, GitHub is aiming to use the API to collect and provide more information about the open source licenses in use on the site, as well as the projects that are using them.

As far as I understand, the way these statistics work is the API queries repositories for a License file, and sorts that out by attempting to find a match with an open source licence.

Looking back, I found an answer of mine to a question on this site. It highlighted whether or not a plugin could be use, which was basically whether or not it had a licence. Looking into the repository for my answer, I discovered that there was no "Licence" file, but rather a tiny little thing in the Readme:

That was the only mention. I later submitted an issue and a pull request adding a licence file. I got this response:

There's no legal requirement to include a copy of it - but its better to, in case someone doesn't know what GPL is. Thank you for the PR.

This makes me wonder: if a project does not need a licence file, and a simple mention in the Readme is enough, then how many projects are actually licensed on GitHub? Has there been any data or research into this?

This makes me wonder: if a project does not need a licence file, and a simple mention in the Readme is enough, then how many projects are actually licensed on GitHub?

This is an interesting question!

To the best of my knowledge there has been only limited studies beyond posts made by Github.

That said, I think that the data of the article and Github graph you mention is not entirely correct based on a few factors:

That said there a few sources of opinions and studies, beside the previous postings or talks from Github staff:

Not the answer you're looking for? Browse other questions tagged license-notice github statistics or ask your own question.

12
Is there data on the frequency of Open Source License type by industry?
2
Can I use Event Organiser plugin in a commercial plugin for WordPress?

8
How to denote certain files are under a different license?
7
How to properly include a license file within an EPUB?
10
Are open source projects growing faster relative to closed source ones?
4
What are good ways to get usage data and feedback for open source projects?
1
Is using the GPLv3 without putting a license notice in each source file OK?
1
How to identify programming language of a file for Open Hub?
5
How should I use software under the MIT Licence without copyright holder?
3
How many open source committers are in Germany?
0
Trying to understand MIT, BSD and Apache 2.0 licenses and attribution with real examples