If I make an app with Apache Cordova / Ionic Capacitor (likely fork of Apache Cordova I think), is put license notices on the source code is sufficient enough?

I've seen an app that did notices each license inside it so the user can read it easily. It did not not built with Cordova, but I mean it's an example of license noticing on mobile app. 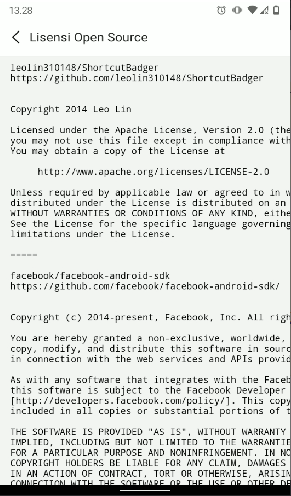 So, my question is does the license comment count as license notices so I don't need to license notice again or I still have to make it like the app above?

Apache Cordova is under the Apache-2.0 license. This means that when building an app with Cordova:

Here, a recipient is anyone who receives a copy of your app, in particular users.

But in which format do you have to provide a copy of the Apache license and the NOTICE file? The purpose here is that an ordinary user can actually read that information. I think it is not sufficient to only keep this information in the source code, even for web apps.

TL;DR: just create a license screen for your app where ALL licenses and notices for ALL open source dependencies are shown.

Specifically for the location of the NOTICE file, the Apache license allows you to pick any of the following places:

You have shown an example of an app that has a “Licensi Open Source” screen, presumably accessible in the settings or another menu. This is the normal approach for including third party notices in an app. If you also have such a screen and include the Apache License and the Cordova NOTICE file, that would satisfy the Cordova license.

Do license headers in source files count as license notices? It depends:

But note: even though the cordova.js file is JavaScript, it is not the complete Cordova-JS source code. Your cordova.js file is likely a minified and bundled version of Cordova. For example, the file you've screenshotted clearly strips out comments when compared with the actual source code. The Apache License defines the Source as “the preferred form for making modifications, including but not limited to software source code, documentation source, and configuration files”.

Not the answer you're looking for? Browse other questions tagged license-notice or ask your own question.

8
Apache 2.0 license - NOTICE, CHANGELOG
5
What is the appropriate way to include third-party libraries copyright notice and permission notice in my project source code?
13
License that requires attribution to end users?
2
"As is, no warranties" statement for open source app that offers precompiled binaries via app/play store and GitHub
0
Trying to understand MIT, BSD and Apache 2.0 licenses and attribution with real examples
2
How should copyright notices be included when distributing source of modified Apache 2.0 code commercially?
2
Where should I place the NOTICE file and the license?
2
Satisfying Apache 2.0 section 4.(b) when forking a project